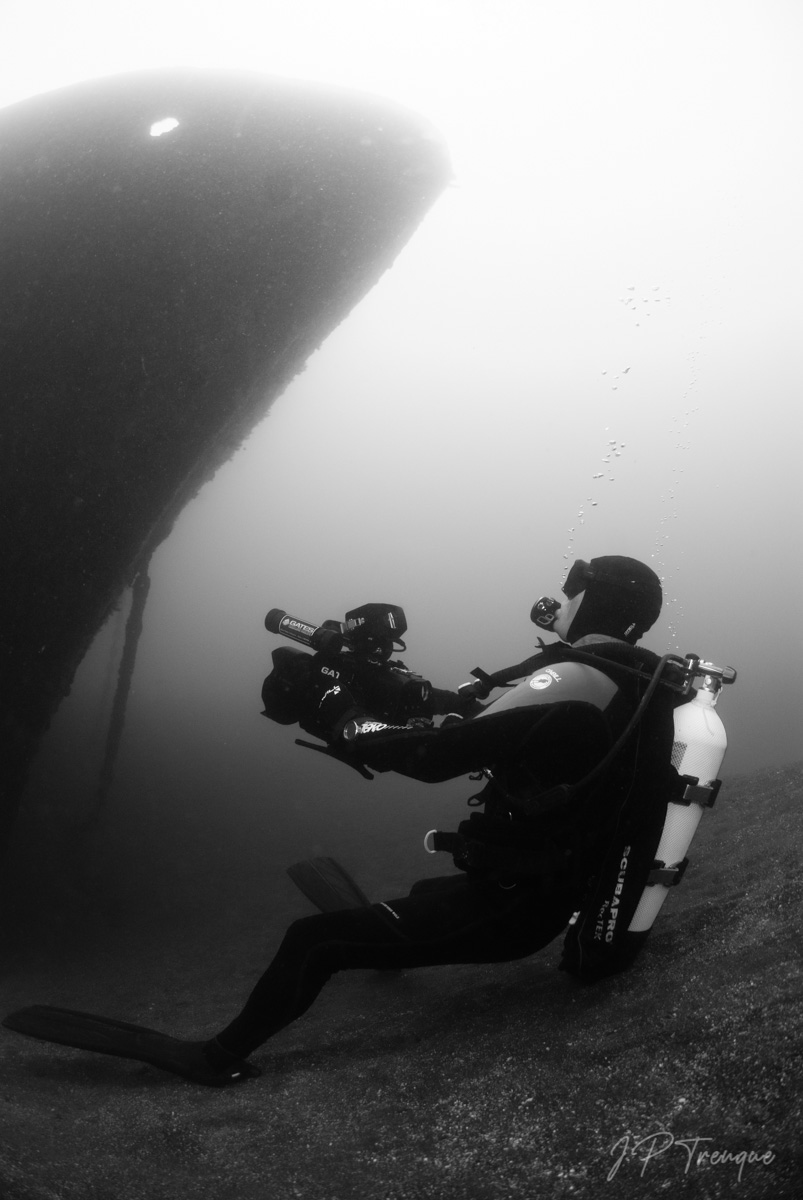 In the early hours of 20 August 1989, shortly after she passed Southward Bridge on the

Thames, the Marchioness, a passenger boat with 130 partygoers on board was hit by the Bowbelle, a dredger several times her own size and capsized within seconds. 51 young people lost their lives that night.

Following the inquiry into the disaster, the then Deputy Prime Minister John Prescott, asked the Maritime and Coastguard Agency (MCA) to consider establishing a dedicated search and rescue service on the tidal reaches of the River Thames. The MCA approached the RNLI charity, and following discussions – which included the Port of London Authority – and intensive training, on 2 January 2002 four RNLI lifeboat stations in Teddington, Chiswick, Tower and Gravesend started responding to incidents on the river, coordinated by HM Coastguard.

I am a volunteer on the Teddington and Tower lifeboats. In late 2008, I received a phone call from my friend Steve Warren from Ocean Optics. “JP, I really want you to meet Andrew Sutton, a fellow underwater photographer who was on board the Marchioness that fateful night. He & I are planning a series of dives on the wreck of the Bowbelle and I think you should come along too”. A quick internet search informed me that the dredger had been sold to a Portuguese company, renamed “Bom Rei” in the 1990s to operate around the island of Madeira and had sunk by accident close to the shore.

Following a brief telephone conversation, Drew and I met and he told me his poignant story. Invited at the last minute to the party, he had stayed sober because of a cold and was standing on the bow of the Marchioness at the time of the collision. Being outside on the deck may have saved his life after they capsized, although his friend Tony wasn’t so lucky. Unable to swim, he tried to hold onto Drew, but sadly lost his grip and was dragged underwater. Exhausted after trying to keep his girlfriend’s airway above the surface while awaiting rescue, Drew was pulled-out semi-conscious where the London Eye now stands.

After years of flashbacks, nightmares, sleepless nights and therapy sessions, he wanted to confront his tormentor and meet the Bowbelle again, and the twentieth anniversary of the disaster seemed an appropriate moment to do so. It wouldn’t be a pilgrimage and there would be neither plaque nor wreath left behind. It would simply be a tribute to those whose lives had been shattered and maybe a way to move on. His main idea was to capture a still image of the bow and film some tracking shots alongside the hull.

Steve and I would buddy him up and help record the encounter. He had also asked us to stand-by as safety divers in case his emotions got the better of him. We would later be joined in Madeira by TV presenter Jonathan Phang, also on the Marchioness that night, having brought a group of young artists the party. Jonathan was recording a BBC programme about his experience, to be aired in October.

The wreck lies upright in 32m of water and can easily be reached by boat from Madeira’s capital, Funchal. Technically, I guess we should refer to her as Bom Rei, but to everyone diving there, she is still the Bowbelle and guides usually explain the history of the ship before taking their customers to visit it.

We discussed the plan at length. After initial equipment checks on the house reef, we would conduct a series of dives, concentrating on the bow to get some shots of it as if the vessel was heading towards us. Leading the dives, Drew would also film the wreck as we swam alongside it while Steve recorded video footage and I took stills. Drew clearly remembers the port side of the vessel passing by after he was thrown in the water in 1989 and wanted to replicate this underwater.

Initially relaxed, the atmosphere grew tenser after our skipper Octavio announced we were above the wreck. The banter made room for reflection and the three of us focused on the tasks ahead. Drew and I looked at each other. “This is it” I said, summarising months of planning. I descended first to check the anchor line. The others would join me once I’d given the rope a couple of tugs to signal that the line was secured to the wreck. The water was a beautiful blue, but because of the dredging operations, the visibility was down to about 10m. At 25m I realised that the anchor was resting on the sand and could just about discern a silhouette in front of me, which could only be the wreck. Using a lifting bag, I moved the line to just ahead of the bridge.

They joined me after a couple of minutes. It was very much Drew’s moment now so Steve & I moved back to give him some space. Although our purpose was to record the encounter, it would have been inappropriate to shove a camera in his face while he was experiencing emotional fireworks.

After a couple of minutes motionless on the deck, his hand extended to feel the hull, Drew signalled to move ahead. Swimming over the wreck made me realise the sheer size of the vessel. We passed a spare propeller resting on deck that would have made many a brass addict happy. Equipment seemed to have been simply left there after the sinking. Several openings revealed the innards of the ship, but we didn’t have time to explore them on this dive; the primary objective right now was the bow. Drew peered down over the railing and stayed there, motionless for what seemed an eternity. Nearly 30m below the surface, he was now standing on the very bow he had seen 20 years previously, seconds before all hell broke loose.
We dropped to the seabed. Partially buried in sand, the hull nevertheless stood very tall above us. Although she appeared harmless now, a chill still went through my spine at the mere thought of so much metal ever bearing down on me. Sitting on the sand in front of the wreck as if to confront it, Drew reminded me of that lone man who had stopped a column of tanks on Tiananmen square, also in 1989.

Having jumped in ahead of my buddies, I was now about to run into decompression. The 32% mix in our tanks had extended the time available at depth, but we had two more dives planned that day and would pay a huge decompression penalty later if we pushed it too much on the first dive. Now was the time to head back. Andrew filmed the swim along the hull just, reliving the moment the Bowbelle sailed past after he and his companions were thrown in the water. Back to the shot line, we then and started our ascent. It had been an emotional but interesting dive and I was relieved that everything had gone according to plan.

The following four dives on the Bowbelle were not nearly as intense as the initial one. We took the opportunity to visit other areas of the ship for more video footage and general shots. The evening after the first day on the wreck, aided by the fine Portuguese wines, Drew opened his soul and talked about his lost friends, the counselling and of course meeting his tormentor again, 20 years on. He had mixed feelings about the Bowbelle, to which he seemed to have given a soul. One recurring thought was that, hopefully she was no longer in a position to harm anyone anymore, unless some careless or unlucky diver got into difficulties.

Having secured most of the images Drew wanted, we decided to leave the wreck alone until the TV crew arrived and check-out what other sites Madeira had to offer. Although the seabed looks rather barren, there is a lot of fish life around Funchal. Groupers are especially friendly and one seemed quite fond of our skipper Octavio, even offering him his flank to be stroked. Pelagics can also be encountered around the island, but we did not see any big animals.

Jonathan and the production company joined us in Madeira the night before our final dive. Having learnt about our expedition, They wanted to be with us on the RIB and interview Drew while we were moored over the wreck. Deeply affected by the tragedy, it would be the first time Jonathan stepped foot on a boat since the accident and he was understandably nervous ahead of the event. Fortunately, the sea was flat calm.

This time, I took a housed CCTV camera with an umbilical down to the wreck to give the others back on the RIB a live view of the Bowbelle. Reaching the deck, we immediately turned right towards the bow and I followed Drew who was taking still shots while Steve filmed the dive. Although she had been renamed after being sold, Drew decided to scratch the concretion on the hull beneath the hawsehole where we thought her old name plate was. Seeing the mark “B  LL” embossed in big white letters through the rust was quite a shock! After her time spent operating as the Bom Rei and all the years underwater, she was still very much the Bowbelle.

One of Jonathan’s comments was that the Madeiran seabed was probably the best place for her to be. Having taken so many lives, Drew was pleased to see that she was now a superb breeding ground teeming with aquatic wildlife, as well as a great attraction for divers. The serious moments and the respectful reflection when dealing with the wreck’s history did not detract from a very enjoyable expedition and the warmth of our hosts made me want to spend a lot more time in Madeira. I will have to pay Tubarao Madeira Dive Center another visit before long.