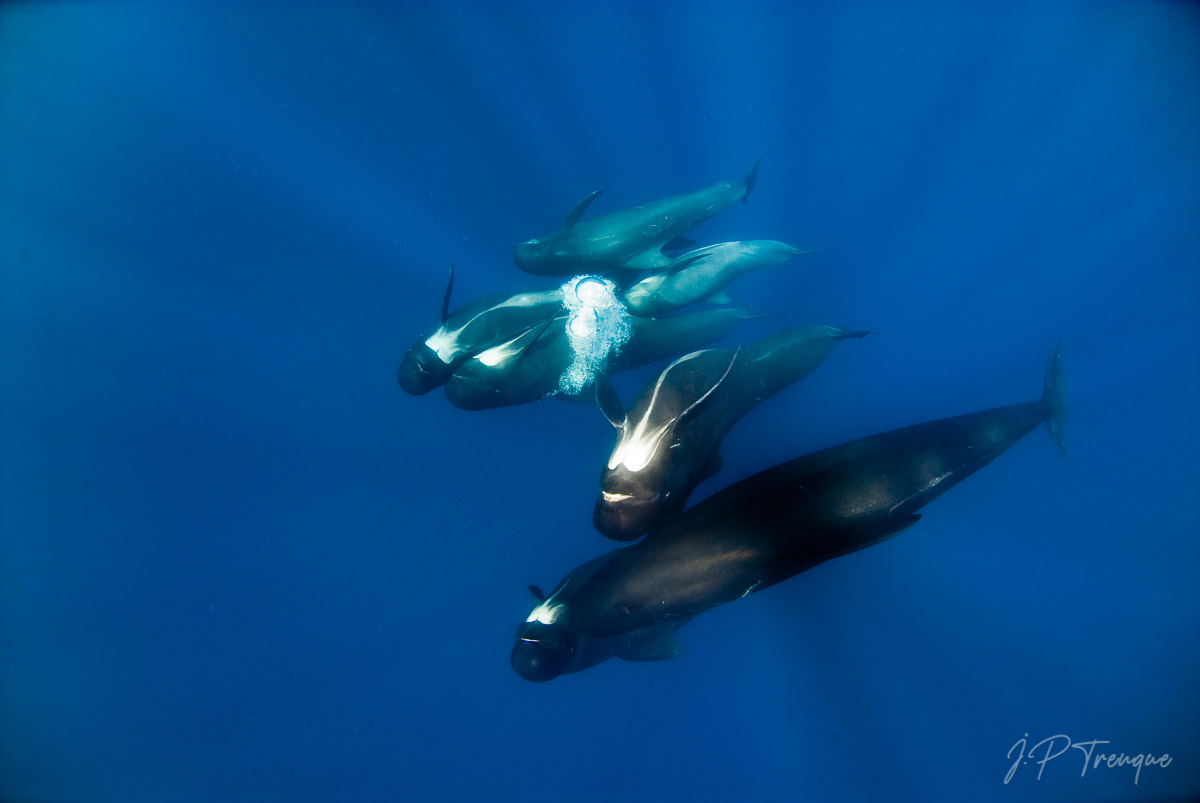 “I have a penis!” This might not be the standard expletive you tend to hear on a dive boat, but take a bunch of underwater photographers to swim among mating pilot whales, and you’ll notice hormones running high when they think they have captured the encounter.

Having been told umpteen times that the Med was dead, I wasn’t totally convinced when Ocean Optics’ Steve Warren said he could have me swimming with big marine mammals in Gibraltar. However, he had organised a similar trip last year and seeing some of the participants’ images made me want to join the August 2009 event. It would be an expedition rather than a dive trip. I needed neither regulator, nor dive computer; just some snorkelling gear, a camera and a lot of patience, because of course, these encounters aren’t guaranteed. To maximize our chances, Steve had enlisted the help of Nick Balban, a respected sports fisherman based on the Rock, whose knowledge of the Strait is second to none. The passage between southern Spain and Morocco may be narrow but spotting a dorsal fin breaking the surface between the Atlantic Ocean and the Med is no easy matter. It took a few hours to find a pod on my first day and I was certainly starting to think of the old “you should have been there last week“ adage.

I knew very little about pilot whales, which can grow to over 7m in length. They belong to the Delphinidae family – they are large dolphins rather than actual whales – and share a grinning rictus with their smaller cousins. Their happy faces would make it difficult to stick to scientific facts and avoid anthropomorphism! Their genus is Globalicephala, in reference to their bulbous head. It is divided into Globicephala macrorhynchus (short finned pilot whale) and Globicephala melas (long-finned pilot whale), which have very subtle differences and are difficult to differentiate at sea. I was told that the species we observed were long-finned.

Safety matters were paramount on this expedition. Concerned about the welfare of the animals, Steve had ruled that there should never be more than two photographers in the water at a time, to avoid stressing them. This would also make recovery into the boat quicker in case one got too boisterous or in the likely event a super tanker travelling at 35 knots got too close for comfort. I guess you can’t swim in the middle of one of the world’s busiest shipping lanes and expect to be on your own. We also noticed that the pilot whales were a lot more placid if we remained motionless rather than moved along, and if we avoided duck dives.

Having only spent four days in their presence, I cannot place any scientific credibility to my observations, but it seemed like pods of 10 to 15 were converging from various directions in the morning to form a much larger group early afternoon. Initially, we would slip into the water ahead of the travelling pilot whales and try to get a few lucky shots as they swam past. Sometimes they would stop and an inquisitive calf would get very close, intrigued by the clumsy neoprene-clad animals. Invariably, the mother would quickly usher their youngster away with a gentle push from their pectoral fins. If they felt threatened, the pilot whales would blow bubbles at us or flick their tails, a sign that it was definitely time to retreat to the safety of our boat.

When several pods met-up in the afternoon, we were sometimes surrounded by more than 40 animals. Totally oblivious to our prying cameras, they performed mating rituals in a concert of clicking and singing noises. Trying to avoid the tails while composing our shots in the increasingly turbid water, we were sometimes rewarded with a decent animal behaviour picture. And then we’d get back on the boat shouting “I have a penis!”