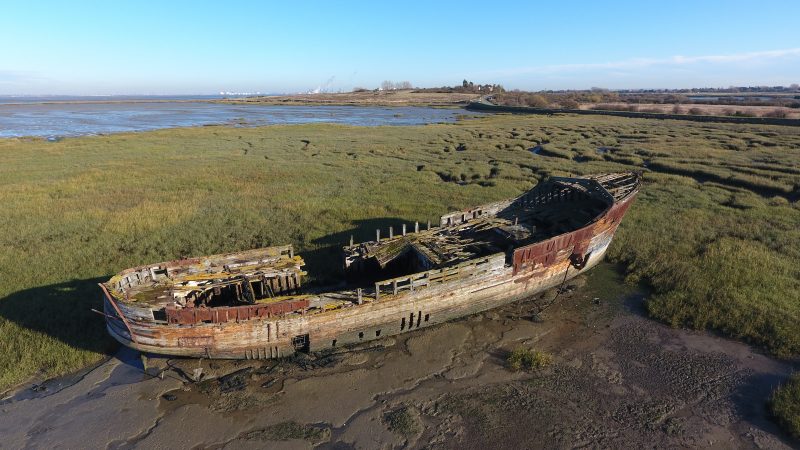 I’ve been playing around the wreck in Lower Rainham again, this time using Litchi, an application which opens up more possibilities with the Phantom 4.

I’m by no means an expert in drone photography. I’ve only been dabbling with it for a few months and don’t get to fly that often.

Having used the DJI GO 4 app until now to fly the Phantom 4, I have just tried a couple of features on Litchi:

The pano mode took 34 pictures (4 rows across 360 degres + 2 straight down). I initially tried to stitch them together in Photoshop, but with mixed success.

My second attempt was with a freeware called Hugin.  I was expecting the process to be laborious, but in fact, Hugin did a nice job of recognising the junction points.

Once this process was complete, I then imported this JPG panorama into Photoshop CC 2018 and used the new 3D Sphere menu.

The result is the interactive sphere below. Apologies, it takes a while to load.

The Waypoints flight mode already exists on DJI GO 4, but it sounds as if Litchi pushes it to a new level.

I still need to do a lot of work on this. but my first impressions were very good. I liked the ability to create a mission on my laptop using the Litchi Mission Hub and then load it into the Phantom 4.

I was messing about with cruising speed, POIs (Points of Interest), waypoint curves, etc and it was great fun ! What happens if I whack the cruising speed all the way up ? Can I fly over the POI and keep the camera pointed at it ? The result is a video which is a bit jumpy, where the rotor blades appear in the shot far too often and where the camera seems to have a mind of its own. But hey, one has to start somewhere !

Here’s the result of the mission. The video is just one take and has not been edited.